If you’ve attended any Oregon gun show in the past year or two, there’s a good chance you’ve seen the Exotic Firearms Nemesis 37mm launchers. Born out of Bend, OR, Exotic Firearms is quickly becoming the “go to” place for 37mm launchers and reloading components for the 37mm platform. As a USMC Platoon Sergeant and 1371 Combat Engineer, company founder Ryan Fisher has a background in explosives & chemistry that fuels his passion to develop the best products he can. Upon leaving the Marine Corps in 2011, Ryan purchased a Spike’s Tactical 37mm launcher and quickly discovered how expensive it was to feed his new “toy” the required ammunition. Necessity, being the “mother of invention”, pushed Ryan to start developing 37mm rounds for himself as well as friends and family. Natural progression lead to selling other company’s launchers and eventually developing EF’s first generation Nemesis launcher.

Like any other first generation product, Exotic Firearms thoroughly tested the Nemesis and began “thinking outside the box” to see how they could make their product better than the competition. During this phase, a competing company faced a lawsuit due to their product “slam firing.” A “slam fire” is what happens when you load the launcher and slide the chamber closed hard enough to set off the primer and ignite the round. Although this seems like something that should never happen, I’ve been told that every 37mm launcher on the market is susceptible to slam fire…Until EF released the Gen 2 Nemesis with their patented “transfer bar safety.”

While I’m no expert on 37mm launchers, I can tell you that IMHO, the cocking system of the 1st & 2nd gen launchers leaves a bit to be desired. The cocking lever is located inside the trigger guard and can be fairly difficult to engage. Every time I cock the thing I’m concerned about hitting the trigger. The obvious answer is to always be sure the safety is engaged. However, the safety on these units is also lacking. It’s not very easy to manipulate due to being pretty stiff and there are no markings to indicate which direction is safe and which is fire. The safety lever itself is also kind of thin making it slightly more difficult to engage when wearing gloves.

Next up, E.F. decided to design and manufacture their own stock system. Sure, you can still mount the Exotic Firearms Nemesis 37mm launchers on a standard picatinny rail but not everybody has those or wants to do that. E.F.’s option includes a folding AR-15 style stock. The basic stock that comes with it is nothing special but it can easily be swapped out with any other mil-spec AR-15 stock.

Remember that cocking issue I previously mentioned? Well, that went away when Exotic Firearms introduced their latest launcher. The Gen 3 Nemesis SL has a brand new proprietary trigger system that completely eliminates the previous design’s cocking lever. The trigger itself is also much better than the previous models. Another feature setting this launcher apart from the others is the side loading chamber. With the push of a lever, the launcher pops open to the left allowing for much easier ejection and loading. The only issue I’ve encountered with this is that there is nothing to keep the lever from accidentally being engaged. If bumped, it easily springs open. Even though the chamber is always closed when I store it, every time I open the case it’s been popped open. Not necessarily a concern during transportation but it’s kind of a pain if you want to pull the launcher straight out the back instead of unzipping the entire case.

Now that you know a bit about the company and products, lets dive into the legality of 37mm launchers.

Most people look at these and the first thing that comes to mind is “grenade launcher.” While 37mm can be used to launch anti-personnel and defense loads, they are not specifically designed for this kind of use. Doing so can be very hazardous and unless you register your launcher as an NFA item, it’s also a felony. More on this later…

37mm launchers are currently considered “signaling devices” by U.S. and Canadian law. That means they may be purchased without any paperwork including a background check. If you own a boat, it is strongly recommended that you have such a device in case of an emergency. As an owner of a 37mm signaling device, it’s your responsibility to practice signaling on dry land as to not create a false alarm. Because of this, discharging 37mm signaling devices is perfectly legal throughout both the United States and Canada….Any time of the day and any day of the year. Why is this important to know? Because one of the funnest things you can do with these devices is launch fireworks….Even if the area you’re in has outlawed fireworks of any kind. Most police agencies utilize 37mm devices in one way or another so they should be familiar with the laws regarding them. If not and it becomes a problem, just politely request that the officer check with their supervisor and that should clear things up.

So what kind of loads can you legally manufacture or purchase for a 37mm signaling device without have to register it? Firework type signaling or wildlife deterrent rounds such as bird bangers, flash bangs, smoke bombs, flares, star clusters, parachutes etc…But if you want the really fun stuff, you need to register the device. 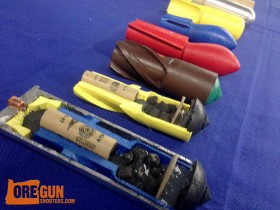 37mm launchers registered as destructive devices are far less expensive than their 40mm brothers. Roughly two thirds of 40mm rounds are defined as destructive devices, requiring a 200 dollar tax stamp for each. With the 37mm platform the only round type that requires registration is a high explosive type round. Additionally, with high explosive rounds you can register a casing as reloadable and only register and pay the tax once. This is one of the big benefits of using one of our 37mm aluminum casings.  ~Exotic Firearms

This giveaway is brought to you by Exotic Firearms. Once you enter the giveaway below, you will be given the chance to earn additional entries by visiting the sponsors sites & sharing this giveaway with your friends & social networks.

The winner will be selected on June 28, 2016 so they can receive the prize in time for the 4th of July.