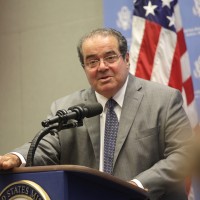 This is my first attempt writing something for publication, so please bear with me. I will attempt to be as direct as possible. I am not perfect, so if I have made a mistake, please feel free to respectfully point it out.

When the powers that be approached me to write some political stories for Oregun Shooters, I was hesitant. My reasoning might be a little paranoid, but I currently hold a federal firearms license. I do not consider my views too far out of the mainstream conservative arena, but I guess I don’t like getting involved in the public political game when my views don’t necessarily agree with the current administration. It may not be a reasonable worry, but it exists never the less. The passing of Justice Antonin Scalia has struck me on a level that has convinced me to put words to paper.

I have been following Facebook and the media since I learned of the passing of Justice Antonin Scalia on the afternoon of the 13th. The media, or at least the ones I tend to get my tidbits from, seem to be concentrated on one of two areas. The first, rightfully so, is the legacy that Justice Scalia left for both his majority opinions, but perhaps more so for his famous dissents. I heard several pundits last night on several news outlets refer to Justice Scalia as one of the great dissenters in court history. Either way, he was an asset to the court and regardless of your political leanings, his loss is a great loss for the American judicial system.

If you are reading this page, then like me, you likely consider the 2nd Amendment an important part of your life. For me, I was raised around guns, at least enough to be familiar with them. My father took my sister and I shooting, but we never had our own guns. But it was a positive experience with guns growing up. When I turned 18, I started college. One of my classmates loved to shoot and hunt, and he liked having me come along. The first few times, I started out using his guns. Then he suggested I buy myself a .22 rifle. So I went to Bi-Mart when I started getting my summer job paycheck and got my first gun, a Ruger 10/22. We started waterfowl hunting that winter, and I used a borrowed Ithaca auto-loader from my father with a fixed full choke. Not knowing any better, I sent at least a box of steel shot through it. I was lucky the barrel never split like Elmer Fudd’s after Bugs Bunny stuck his finger in it. So I went and bought my own shotgun, a Remington 870. Shortly after, the hunting bug hit me, and I bought a used Ruger M77 .30-06 from a friend. These purchases and experiences have sent me on an 18 year journey that has seen me become a gunsmith, run my own gun shop, and enjoy collecting. I have lost count of the amount of firearms I have owned over the years. I may not have liked them all, but I have loved every one of them.

In my lifetime, I have seen the pendulum swing towards more gun freedom. Every state now has some form of legal concealed carry. Several states have even gone so far as to implement so-called constitutional carry. I have seen both the implementation of the federal assault weapons ban and its eventual sunset.

Perhaps most importantly, I have seen the Supreme Court of the United States confirm that the right to keep and bear arms is an individual right, guaranteed to citizens, regardless of their membership in a militia. The author of this opinion was Justice Antonin Scalia. In his majority opinion, he wrote, among other things, that the 2nd Amendment did in fact apply to modern arms, not just antiques, just as the 1st Amendment applies to modern forms of communication and the 4th Amendment applied to modern forms of searches. He also wrote that the text confirmed that individuals were guaranteed the right to have and bear arms in the case of confrontation.

The McDonald v. Chicago majority opinion, authored by Justice Samuel Alito, and joined by, among others, Justice Scalia, pushed the pendulum further by concluding that federal law did not allow for local jurisdictions to overrule the 2nd Amendment, overturning a de-facto handgun ban in Chicago.

We have seen a recent push by the left to shove the pendulum back the other way. In Washington a few years ago, its citizens decided to vote to strip themselves of the right to sell personal property without a background check. Last year, Oregon’s legislature didn’t even have the respect to put a similar measure to a vote of the people. They rammed it through as an emergency measure, while limiting testimony by those opposed to the measure. By pushing it through as an “emergency measure” it cannot be undone by a vote of the people, but rather must be undone by the legislature. This shows the fear on the part of the legislature that the people didn’t support their plans. Why else wouldn’t they put it to a popular vote?

The death of Justice Scalia has to be a rallying call to all gun owners. He was a great champion for the constitution, and a great champion for our 2nd Amendment rights. In his memory, and in defense of ourselves, we have to get out and vote. We can no longer have the excuse of saying that since Portland and Eugene elect our officials, so why should we bother. If either Hillary Clinton or Bernie Sanders is elected as the next president, they will likely have the opportunity to elect multiple Supreme Court justices, quite possibly including the replacement for Justice Scalia. We enjoy more rights as gun owners today than we did 20 years ago. But these rights were guaranteed based on a 5-4 ruling. That majority no longer exists and may shift the other way if a liberal gets their nominations through. We need to get involved on our local levels as well, as state democrats have become emboldened by recent election victories. We are in danger of sliding down the slippery slope until Oregon and Washington are as bad as California.

If you care about your 2nd Amendment rights, if you believe that the 2nd Amendment is the right that protects the other rights spelled out in the constitution, you must become involved. Otherwise, the pendulum will be pushed back further, and it will be our children who pay the consequences of our inaction.

Consider me stepped down from my soap-box.

I am a thirty-five year old, happily married father of one from the central Willamette Valley. I grew up shooting with my father and started buying my own guns at 18. I started fixing guns at 25, and have worked in various parts of the firearms industry since then, from manufacture to sales. I have several academic degrees and a trade degree in gunsmithing. My firearms passions change, but are currently focused on sporterized Springfields and Mausers from the 20's through 60's.