December 12-13, 2015 marked the first Tactical Ordnance & Ammunition gun show in St. Helens, Oregon. As you may be aware, Oregun Shooters attends many Oregon gun shows where we promote our network of websites, sell our Oregon based Second Amendment swag and represent the Oregon Firearms Federation. Although we had previously attended another promoter’s gun show in St. Helens, we found it wasn’t a good fit for us.  When Tactical Ordnance & Ammunition first approached us about their vendor invite only gun show, we jumped on the opportunity to work with a local manufacturer and their “out of the box” ideas on promoting this new gun show.

So what did they do different? The thing that really caught our attention was TOA’s decision to invite the Columbia County Sheriff Department to attend and process Oregon CHL applications and renewals for Columbia County & Washington state residents. At the time, there was roughly a 3 month wait for this process but at this show you could take the class, get photographed, fingerprinted and process your application all in a single day avoiding the multiple month backlog. Word of this spread through the county and across the river into Washington. Embracing the local community and offering them something special had a nice impact on the attendance of this show.

As previously mentioned, this was an invite only show as far as the vendors go. Because of this, the show was full of….GUNS! There were no pillows, candles, salsa mixes, sheet sets or bathtub restoration companies in attendance. It was a small show with quality vendors and surprisingly not much overlap in the firearms and accessories offered. Here are some of the companies who were there and a little about them:

The first company is of course Tactical Ordnance & Ammunition themselves. This is a St. Helens, Oregon based company who manufacturers ammunition, barrels and complete rifle builds from the AR platform to high end bolt action rifles. Along with their own line of ammunition, TOA also stocks ammo from several other manufacturers as well as many firearms parts and accessories. Their staff is always courteous, helpful and full of knowledge.

Grey Area Tactical Distribution is a family operated firearms manufacturer and retailer with a passion for the Oh-so-American AR15 platform.  At Grey Area, you can expect a friendly interaction to accommodate every shooters need, from casual to competitive. True locals understand all to well what Grey Area means. Dank, dismal, and wet describes the Northernmost parts of the Great Northwest. It is better to embrace the grey area  rather than be consumed by it. 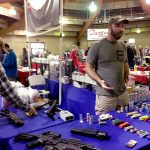 There were several other companies in attendance but my phone broke so I was unable to get photos of them all. I spoke with Rob Heller, owner of Tactical Ordnance & Ammunition, last week at the 2016 SHOT Show where he confirmed that TOA will be putting additional gun shows together in the future. If you’re interested in being notified when this happens, please consider subscribing to our News & Updates.