TNW Firearms is conveniently located smack dab in the middle of the woods just outside of Vernonia, Oregon. While this may not be the best location for you and I, as long as UPS will pick up and deliver, it fits the needs of owner Tim Bero just fine. In 1990 Tim relocated from SoCal to the PNW where he ran his machine shop developing automated equipment lines for other industries, literally out of his back yard business.

5 years later, he was approached to do some restoration work on a batch of 1919’s and that’s when TNW Firearms was born.

Today, TNW employs about a dozen people and is best known for their replica semi-auto versions of full auto historical military weapons. Since 1995, the business has expanded to include reproductions of the Suomi M31, MG34, M2, M3HB and of course they’re still building the 1919’s. They’ve also dabbled in M249’s as well as a few other medium duty type weapons.

While visiting, we got a chance to see several of the steps involved with the production of their MG34’s. As an interesting side note, TNW Firearms is currently the only manufacturer in the world who is building MG34 receivers. The original factory in Germany required a 2 story tall machine for broaching the 13 inch long steel receivers. These days, a machine like that would be quite the investment for producing a firearm with such a limited audience. While the MG34 stock, top cover, barrel and some other components are original, TNW had to overcome this obstacle by designing their own hydraulic broaching machine which is far more compact than the German version. The new machine utilizes 60 broaches each with 4 to 5 “teeth” per unit and a difference of 1.5/1000th (did I write that correctly?) of an inch from tooth to tooth. This is a lengthy process. In fact, Tim said it takes about 6 months to move a batch of MG34’s through the entire production line. While a lot of this is done by hand, some of the process is also machined with a Haas VF2 CNC as seen sped up in the video below.

A TNW Firearms employee constructs a 1919

Moving into the current times, TNW Firearms supplies training weapons for certain secure Government facilities. They outfit M4’s and Beretta M9’s with simunition barrels, magazines and bolts then ship these blue training guns wherever they are needed.

The company also makes their own AR-15 upper and lower receivers which I’ve seen carried in several Oregon gun stores and used on a number of local builds. TNW themselves make both an AR-15 carbine and a pistol using these products. They also offer a carbine length AR-15 gas piston conversion kit. Then there’s their SGP-QCB… This thing features a hot swappable barrel system which is capable of changing out the barrel and gas piston in a matter of a few seconds. If you’d like to try one of these out, I noticed they have the 7.62 version for rent over at Threat Dynamics in Sherwood, OR.

Over the last couple of years, TNW Firearms has been working on their take down PCC (Pistol Caliber Carbine) known as the ASR (Aero Survival Rifle). This compact package currently comes in 9mm, .40 and .45 caliber with a lower receiver that accommodates Glock mags. Best of all, the upper receiver is what is considered to be a firearm allowing the lower receiver to be changed out to fit current and future caliber conversions. They even offer the ASR in a complete package with barrels and such for all 3 calibers plus an optic & level 3 shielded backpack to carry it all in. 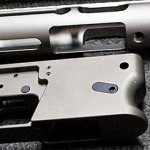 Onto the ugly part… When I asked, Tim was open to discussing some short comings I’ve heard about the ASR. The primary complaints were that things like the optic & grips weren’t consistently the same part and that there was a high failure rate right out of the box due to magazine and/or bolt problems. Tim acknowledged the issues and even went into some fairly specific details on steps the company took about 6 months ago to correct them. They now run 10-12 rounds through each gun then ship it with 3 of the spent casings and the magazine that was used to test fire the individual firearm itself. TNW stands behind their products and at this point, Tim is confident enough in his ASR that he offered one up for us to review and give away. You should leave a comment or drop your email address into our newsletter subscription in the left column to ensure you’re kept in the loop when we announce the giveaway details.

TNW Firearms products are available through some retailers or you can order direct from TNW over the phone or through their website and have your purchases shipped to the FFL of your choice.