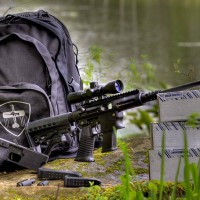 Multi anything gets my juices flowing. That’s why I was pretty excited when I found out I got to test and review the TNW Firearms Aero Survival Rifle (ASR) multi-caliber kit. It’s like a multi-tool that goes bang! Here’s what I found out through my testing and evaluation.

I will start off by saying this gun is fun. If you haven’t had the chance to shoot a PCC (Pistol Caliber Carbine) it is something I would highly recommend. It is hard to define exactly why but they are my favorite type of rifle to shoot. Perhaps it’s the fact that it turns ammo into a multi-platform option? Anyway lets talk specifics about what this kit comes with. The first thing you notice is the sturdy pack included in the complete package. I would compare it to a 72 hour pack that you would find at most tactical outfitters. Good pocket layout and comfy well padded straps for the shoulders, waist, and chest. There’s even a dedicated pocket where you can insert a level 3 ballistic protection plate which is sold separately.

The real fun begins when you dig into the unassuming cardboard box containing the rifle. Inside you will find three barrels; 9MM, .40S&W and .45ACP along with the three corresponding bolts. There are also three magazines for the said calibers. One important thing to note is that the ASR takes standard Glock magazines so if you have Glock pistols you should be able to multi-purpose your mags. There are two lower receivers included since the .45ACP mag well is larger than that of the 9MM and .40S&W; and one upper receiver. Also included in this kit is an AIM Sports four power scope and two sets of rings, a medium and an extra high set.

One of the big selling points of this rifle as a “survival rifle” is the way in which it stows. The barrel has a heat shield that extends slightly past the front of the upper receiver. This heat shield is also the barrel nut. If you want to put the rifle in a pack all you have to do is grab the heat shield and unscrew it. You will feel a ratcheting ball detent in the upper that holds the barrel in place during firing but it is easily overcome by hand force to unscrew the barrel from the action. When you’re done you have a package just over 16” long. Pretty neat trick.

After unpacking the rifle we assembled it with the .40S&W components. I did encounter one issue when mounting the scope. I wanted to mount it using the taller rings as they provided the most comfortable cheek weld but upon finger tightening one of them, a screw hole stripped out. It can happen with any mass produced ring and TNW replaced it later with no trouble. So, we used the lower rings and it worked fine. We then went to the indoor range at Threat Dynamics and put some rounds down the tube. Another reviewer and I had some ejection issues but upon further investigation we found it was shooter error. We were holding our hands a little too far back and slightly covering the ejection port causing spent cases to bounce back into the chamber area. Once we adjusted our hold it ran 100%. It was printing decent groups at the limited range we were shooting at.

I decided I wanted to test the other calibers in the outdoors at a little further distance so I contacted a friend and we spent an evening at his property punching paper and banging steel with the 9MM and .45ACP conversions. We stretched the distance to about 35 yards on paper and a little further on steel. Again the ASR shot tight groups IF we really focused on our trigger control. The trigger is not great and it sits pretty far back toward the grip so you really have to concentrate so you don’t over reach it and pull your shots all over. When running the 9MM conversion we did experience some problems. All the issues could be traced back to the magazine though. The 9MM magazine provided was not a Glock factory magazine but an aftermarket brand. It did not want to lock into the lower properly. After working it in and out a number of times and being very forceful with it we got it working to the point where the gun fed and ejected better but it was never 100% with the 9MM conversion installed.

At this point it was starting to get dark and the AIM Sports optic while adequate for daytime was a little dim in the failing light. We opted to switch to a Trijicon ACOG when we swapped out the .45ACP conversion since you have to dismount the scope to accomplish the caliber switch. That’s when this rifle really came to life! The clarity and better cheek weld afforded by the ACOG made running steel plates and dueling trees a snap. And the big 230gr .45ACP slugs hit with authority! There’s no unpleasant recoil when shooting the .45ACP but you definitely know its giving more wallop than the other two calibers! The .45ACP magazine provided was a Glock factory mag and it locked in and ran the smoothest of the three. 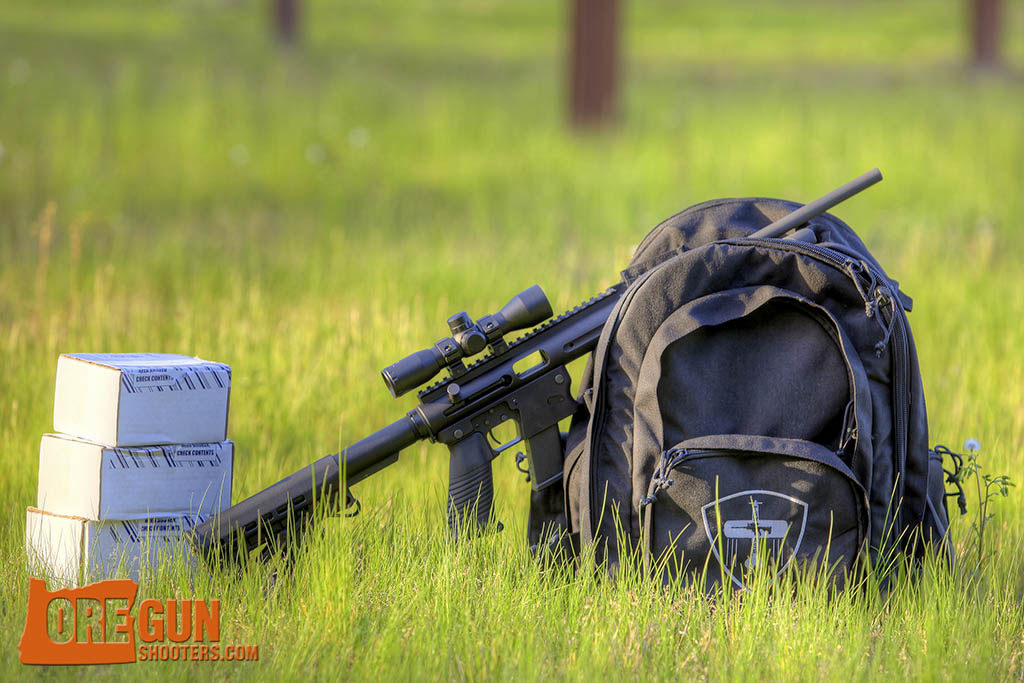 Not everything about this rifle is peaches and cream. I’m not a big fan of having to remove the optic to change calibers. Another issue with the caliber change in this rifle is the bolt retaining screws. If you tighten them all the way down it locks up the bolt so you have to run them down until they stop and then back them off, essentially leaving the part that locates your bolt “floating” in the gun ready to come loose or tighten up and lock up the action. I did not see this happen and it could be an unreal concern but it was still in the back of my mind the whole time.

A brief word about the stock: It’s very wobbly and I strongly dislike it. There are tension screws to take out the wobble but if you tighten them enough to sure up the stock then it no longer slides over the buffer tube. Its only saving grace is the QD swivel attachment points and the one swivel that comes with it.

The last area of dis-satisfaction I will bring up is the controls. The mag release and safety have no texture to them at all and feel the same to a finger-tip as the trigger and take-down pins. The only way to reliably work them was to look directly at them to make sure you were pushing on the right button/pin.

Now I know what you’re thinking, but I actually don’t hate this gun. It was tons of fun to shoot. All of my complaints are because I think it is a really cool idea. I love that I can cut the length in half to store it in a pack without any tools. I love that it takes the same mag as pistols most people already have. If you get a good magazine and keep your fat fingers out of the way it is very reliable.

Overall I think this multi-caliber rifle kit makes for a really fun afternoon plinker that lets you shoot with the same mags as a pistol you might already own. It also helps you clean up those pesky odds and ends of ammo in three calibers you might have laying around. As a survival rifle it gives you options on using different ammo depending on availability. And of course you can shorten the length by half without any tools which makes it easy to stow. I think the TNW ASR is a good option to consider if you are looking for a fun pistol caliber carbine…and in my opinion everyone needs at least one of those.

This giveaway is brought to you by TNW Firearms & Red Skull Ammo. Once you enter the giveaway below, you will be given the chance to earn additional entries by visiting the sponsors sites & sharing this giveaway with your friends & social networks.

Up for grabs is the pictured complete rifle package INCLUDING AMMO FOR ALL 3 CALIBERS!