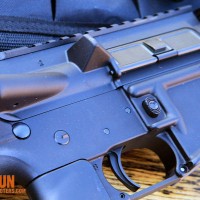 Modern sporting rifles are everywhere these days. The sale of them has shown some very strong trends lately. Working in a gun shop I get to see this change in the winds first hand. No one seems to be terribly interested in the totally tricked out and astronomically expensive AR15’s of just a few years ago. Now if, and it is a big if, people spend more than $1000 they seem to be spending it on less cookie cutter modern sporting rifle like the IWI Tavor or the new Sig Sauer MCX. The AR crowd has gravitated in a big way toward the base or economy model AR15’s. Which brings us to the Greyhound Tactical Solutions AR-15.

This Greyhound Tactical Solutions AR-15 is assembled by Greyhound Tactical Solutions, in Beaverton, Oregon. GHTS is the manufacturing division of J&B Firearms Sales where they stock a nice selection of GHTS AR-15 variations. At first glance the rifle looks pretty basic but it does almost everything one would need an AR-15 to do. They are using Anderson Manufacturing LPK, upper and lower receivers which I have found to be well made and sold at incredibly low prices. The stock is just a very basic M4 style six position collapsible unit but it does lock into place in all its positions allowing users of different sizes or equipment levels to size the gun to them. It also sports a basic military style pistol grip which gives you a place to hold onto and pull on the heavy, gritty, standard AR trigger. Moving to the upper we find a flat top sporting a properly spec’d picatinny rail to mount any of the hundreds of optics out there for the modern sporting rifle platform. This upper also features M4 feed ramps, forward assist and a dust cover. In front of that there is a very basic seven inch quad-rail forend. Some may consider this outdated but it still does everything the fancy new slick-side, MOE-infused, key-mod sporting, free-float tubes do in regards to accessory mounting and it does it at a fraction of the price. The ESS Solutions 16″ 1/7 twist 5.56 barrel has a semi-gloss almost crinkle finish to it and has the ubiquitous M4 profile. It doesn’t have some scientifically perfected super coating that lets you shoot 16,000 rounds of continuous full-auto fire but let’s be realistic, most of us won’t (and probably can’t afford to) put even 5,000 of semi-auto fire through the gun so this barrel will be more than sufficient. Mounted to the barrel in front of the forend is an Anderson Manufacturing picatinny topped gas block that may be used for mounting a front sight. There is some debate on whether or not to mount polymer sights on a gas block. Some suggest it can quickly create a plastic puddle so if you want to do the polymer thing you may wish to consider mounting it on the top forend. Although with this kind of rifle build, mounting to the gas block will probably be just fine. 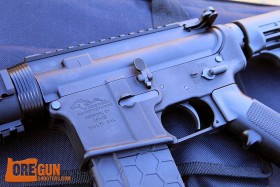 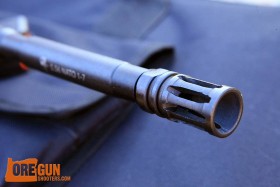 The rifle came to me with a lock and in a nice zippered soft case of medium quality with some external mag pouches. When I unpacked it I began a full inspection inside and out as I try to do on all new guns before I put any rounds through them. One of the first things I noticed was that the HEXMAG 30 round magazine that shipped with the gun was very tight in the magwell and would not drop free. I tried five other brands of magazines and did not experience this issue with any of them. Internally to gun was put together right. The gas key on the full-auto rated bolt carrier group was properly staked, the trigger and hammer springs were where they were supposed to be, the gas block was nice and tight, and the buffer retainer was properly captured by the receiver extension. All this may sound like “Duh of course they are” but I have seen problems in all these areas from much more well known and respected manufacturers over my years of firearms retail and shooting experience. The upper and lower were a little loose but in my experience this has never effected function of any of the rifles I have shot even when it gets pretty severe.

The final step to my inspection (and what should also be the final part of any firearm inspection you do before shooting) was to look down the bore and make sure it was free of obstruction. It was not. About ¾ of the way down the barrel there was something completely blocking the barrel. I used a rod to push it out. Turned out to be a tightly fitting oiled patch. Might not seem like much but I have seen a lot of blown up guns that didn’t have much more than that in them when they detonated. ALWAYS check your bore!

After all that it was time to head to the range! Although GHTS does offer rifles with BUIS, the rifle I was given for this review did not include them. IMHO, an “optics ready carbine” should have folding back up sights not lack sights completely. While I’m not spending a ton of money on the gun, I do want to be able to shoot it without spending $100 more for some sights or an optic. In the end, I just mounted up a handy Bushnell TRs-25 and headed into the range to sling some lead.

While the HEXMAG did not drop free or insert all that easily it did feed and lock the bolt reliably. I was limited to a fairly short (14 yard) indoor range so I didn’t do any real serious accuracy testing. The rifle cycled well with standard XM193 ammunition though. It’s very light in the hands and balances well. My first few groups were a couple of inches from a standing unsupported position. After about 40 rounds they started to open up though. Being the worrier I am, I immediately thought the worst – the barrel wasn’t properly tightened or was of such low quality that it had heated up to much in this short session. I was completely wrong. Just the mount coming loose on the TRS-25. Lesson here: always properly tighten your optics before shooting.

This rifle worked flawlessly. It doesn’t have all the bells and whistles. Almost everyone I know who does have all the bells and whistles on their rifle either A: doesn’t know how to use them; or B: doesn’t ever get a chance to use them. This rifle allows for the mounting of a good optic, a good set of BUIS, a good sling, a good flashlight, and a forward grip (if your shooting style lends itself to one). That’s all you really need in a defensive/fun/critter getting rifle. And at $599.00, it does all this without breaking the bank. This is definitely a good candidate for anyone looking for a budget rifle to get started in the AR15 world. The great thing is if you decide you don’t like something about this one just remember: it’s an AR15, practically tinker toys for adults with limitless combinations of aftermarket goodies! With Christmas right around the corner, these are the kind of rifles that will be under a lot of trees this year.

This giveaway is brought to you by Greyhound Tactical Solutions & Red Skull Ammo. Once you enter the giveaway below, you will be given the chance to earn additional entries by visiting the sponsors sites & sharing this giveaway with your friends & social networks.

Up for grabs is the pictured rifle package + 250 rounds of ammo!