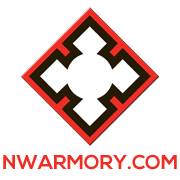 Just over two weeks ago, Northwest Armory opened a new store in Tigard, OR. Although this shop is considerably smaller than their Milwaukie location, it seems to be pretty well stocked. The new store is located in a strip mall kind of area next to Bi-Mart on SW Pacific Highway.

One thing that caught my eye right away was their handgun display. Instead of sticking them all in a glass case, the handguns are mostly mounted on the wall behind the counter. There were some in the case but at first glance, I think those may be their used selection. Showcasing the handguns this way really sticks out and makes it easier to spot what you want without having to move back and forth along the counter. They also had a decent selection of bulk ammo in stock.

I followed 2 other guys into the shop and as we approached the front door, I noticed there were already 6 or 7 other customers inside. While that’s also typical of their other location, it’s not typical of most gun stores. I’m not sure if people were there because it’s a new shop, because of their solid reputation or because there’s not many other options in the area but I hope it’s a sign of things to come.

As the owner of Oregun Shooters, I will not be leaving an official review on their page here but I will gladly state that I’ve been 100% happy with my dealings with Northwest Armory. If I remember correctly, I made my first purchase with them roughy 20 years ago. Since then I’ve been to their store many times and have always been treated with respect and never overlooked. They carry a great selection of products from Oregon Manufacturers such as Noveske and Northtech Defense which, as a guy who is all about promoting Oregon businesses, is important to me.

One more thing I’d like to add about Northwest Armory is that they are one of the few shops who not only stock the products that today’s gun buyers want but they also see the importance of proper marketing. Most gun stores are still stuck in the “good old days” and are very slow to make the jump to online marketing. Tim Greve and his team are appropriately aggressive with their social network posting as well as keeping auctions on sites such as gunauction.com. Connecting with existing and new customers is vital to every business and there is no better way to do this than online marketing and attending gun shows. Northwest Armory does all of this and they do it better than most.

If you’re in the Tigard, OR area, stop by and check them out today!