Snake Eater Tactical is a small batch nylon tactical accessory manufacturer located in historic downtown Oregon City, Oregon. This one man show is owned and operated by Chris Calvert out of the storefront of his other business, Seven Seas Canvas. Chris is a life long firearms enthusiast who enjoys practical defense, tactical, long range and cowboy action shooting. These interests are a nice fit for a guy who has the equipment and know how to produce good quality shooting belts, mag pouches and other accessories.

After serving 4 years sewing and maintaining flight gear in the US Navy, Chris went to work making custom canvas boat and marine covers. In early 2010 and with 12 years of industrial sewing under his belt, he decided to strike out on his own and opened Seven Seas Canvas in it’s current Oregon City location. Over the last 2.5 years, Chris has been manufacturing his hand made tactical products under the label of Snake Eater Tactical.

So what exactly does he make? His biggest selling products are rigger belts and magazine pouches but he also manufactures complete duty & war belts, tourniquet & other medical gear holders and flashlight / multi-tool holders. Snake Eater Tactical can also assist you with constructing nylon based prototypes for your business.

While visiting Snake Eater Tactical, Chris made me a black custom Cobra Riggers Belt (seen in the pics and video) with tan “spaghetti western” stitching. He started out by measuring my actual waist size instead of going of my pant size only. The reason for this is to make a better fitting belt with the appropriate length tail that won’t interfere with my other gear. (HA! I’m a poet!) Anyway…The belt is constructed with a double layer of type 13 parachute webbing secured together by 5 full length rows of stitching. These belts are offered in either 1.5″ or 1.75″ width. In most cases, you will probably want the 1.75″ version as that fits best with most denim jeans and “tactical” pants such as 511, Kitanica and so forth. This is my first belt with an AustriAlpin Cobra buckle and after wearing it with my EDC (Every Day Carry) for the last week, I’m really digging it. These high quality hand made belts are offered in black, coyote brown and OD Green and will set you back just under $70.

Another popular product from S.E.T. is their Burro Magazine Pouch (same color options as the belts). The pouches feature curved KYDEX inserts which keeps the nylon from fully collapsing allowing you to easily reindex your mag with one hand. The rifle mag Burrows accommodate a wide range of magazines including standard steel GI AR, polymer magazines such as Magpul P-Mags, AK magazines and even AR-10 magazines although they are a tight fit. Snake Eater Tactical also makes an extended Burrow to fit the massive Surefire 60rd & 100rd AR mags. The pistol versions not only work perfectly with double stack mags but they are versatile enough to also hold flashlights, mulit-tools, pepper spray etc… 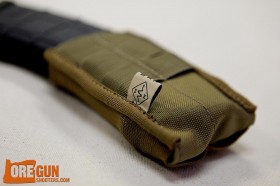 Chris describes S.E.T. as “…focused on designing and building minimalist nylon gear that is durable, functional, comfortable, light weight and useful for multiple purposes” with the goal of creating “products of exceptional design and produce them in small batches with close attention to detail.” If this sounds like the kind of gear you can use for your range days, EDC, 3 gun shooting or whatever…Support a fellow Oregonian and check out Snake Eater Tactical!

SCROLL THROUGH OUR FB FEED BELOW